a toast to posts

Finally got around to writing part II of my trip to New Orleans – riding the Caltrain down to the South Bay is my favorite time to blog, haha. When you don’t have internet for over an hour, writing is the best pasttime 🙂 Read on for my experience with more food, the Hurricane Katrina tour, and more!

On day 3, we finally got to try Café du Monde, which is famous for its powdered beignets and coffee! I remember seeing the Café du Monde coffee tins everywhere growing up. It’s a staple in Vietnamese homes because many people use its Chicory coffee for Vietnamese iced coffee (café sua da)! Also, another interesting fact – a lot of Vietnamese people actually fled to New Orleans (versus other states in the U.S.) during the Vietnam War because the weather is quite similar. Definitely can see why, as it was extremely humid when we visited! Definitely made me appreciate California weather.

The beignets were pretty damn delicious! Definitely lived up to their hype, but then again, I haven’t had beignets in years. While they were good, I couldn’t get over how dirty the actual café was. Seating was outside underneath a large awning so we already felt super sticky from the humidity. There was a layer of powdered sugar on the ground, pigeons were scrounging around by people’s feet, and the tables were covered in sticky residue from the coffee and beignets. The waiter took our order on a dirty napkin. I don’t get disgusted too easily but this was seriously gross. I’d still probably go back for the beignets because I’m a fatty and food > cleanliness sometimes.

After, we went on a free walking tour from the 3-day Hop-On Hop-Off bus tour we bought. I know, I know – seriously? Hop-On Hop-Off? We bought it because we figured it’d be easier to take this bus around rather than use Lyft/Uber all the time. Probably wouldn’t buy this again, but it did take us to some cool places, it was pretty cheap, and we did learn some awesome facts about NOLA! Walking tour and the bus were nothing special though. Saw some beautiful architecture though – the galleries (the iron “balconies” shown below) are gorgeous! At night, we did a Haunted tour and it was the dumbest decision of our trip, lol. Do not recommend – it wasn’t scary at all and it was just a waste of $20. 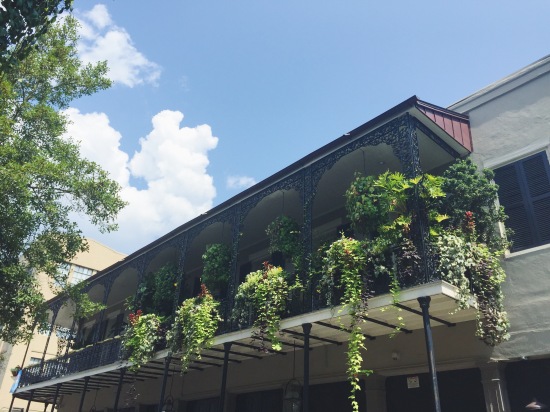 The next day, we walked around Lafayette Cemetery #1 in the morning (one of the oldest in NOLA) and then went on the Hurricane Katrina tour. Yes, ANOTHER tour. However, I am so glad we chose to do this one. When Hurricane Katrina happened, I was in the 7th grade. I knew that it was a terrible catastrophe that devastated Louisiana and displaced so, so many families. However, actually seeing the homes that were damaged and hearing the stories made it so much realer for me. I can’t believe that the water was up 14, 15 feet, and people had to CANOE miles to the Superdome, where many people went to seek shelter. Really recommend the Gray Line tour if you make it out to NOLA. While it was heartbreaking to hear the history, it was so inspiring how the community came together and rebuilt the city. So many people flew in to rebuild homes and they had support from all around the world. 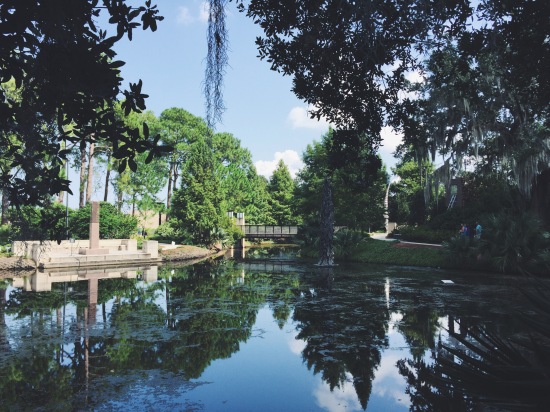 During the tour, we also stopped by New Orleans City Park and got to walk around the Sculpture Garden, and that was also a major highlight of the trip. My favorite piece in the park is called Karma, created by Do Ho Suh (shown belown). There are a lot of interpretations of this piece, but my favorite is that we’re built from those who have stood before us. and we all must rely on & trust each other.

That night, we went to watch live music at Preservation Hall, which was an amazing experience! We saw Leroy Jones, a pretty well-known trumpeter from the area, along with The Preservation Hall Jazz Masters. The place was very tiny and hot, and most of it was standing room only. However, all the musicians were all SO talented and it was really special. I recommend this as well!

That pretty much concludes my New Orleans trip! It’s a beautiful city with a ton of culture. One thing that a tour guide said that stuck with me was that nothing ever leaves New Orleans – the culture is constantly changing and evolving. It has absorbed Spanish, French, African, and many other cultures into a unique blend of its own, and the food, music, architecture, and art all reflect that. Definitely would love to go back and explore it a little further (and probably take less tours) 🙂