a toast to posts

First off, I am so sorry for that terrible title. Last weekend, I took my first trip out to the South! I’ve been dying to go to New Orleans for a while, so my friends and I immediately bought tickets when we found a pretty cheap deal. Read further for my adventure in NOLA with tons of food, dranks, live music, and shenanigans!

Justin and I took a super early flight on Friday so we could land in New Orleans by the afternoon. Once we got there, we explored a little bit of Jackson Square and Bourbon Street, and CONSUMED this massive shrimp poboy from NOLA PoBoys for a quick “snack” before dinner later. Freaking delicious, but I went into an instant food coma afterwards. No idea how any one person could finish this sandwich…down below is just my half. Looks small but it was humongo! Generous portions of shrimp.

Then we met up with our friend Wenyi, who took a later flight! Had dinner at this pretty mediocre spot on Bourbon and then went out straight after. Bourbon Street is INSANE, GUYS. Drunk & loud people everywhere, bachelor and bachelorette parties left and right, music blasting from every bar/club…I definitely have never experienced anything like this. Also, with no open container policies like what we have in California, people took their beers & drinks everywhere! It’s like the Vegas of the South, but way less bougie and a bit more ratchet. In one bar, this girl was riding the mechanical bull in her dress. Her bright pink underwear and butt were showing the entire time and the guy controlling the bull made it super easy so she stayed on for 5-10 minutes while men in the bar oogled and whistled at her. RATCH.

We had a few drinks, including this thing called the “hand grenade”, which is basically like a Fat Tuesday. Delicious, but way too sweet. At another bar, this bargirl literally cornered me and poured 3 test tube shots into my mouth. I said no at least 10 times. Since I did, my friends had to, according to the bargirl – aggressive saleswoman! Wish I had those skills when I worked in sales. Bourbon Street was fun, but a little too crazy and obnoxious for me. 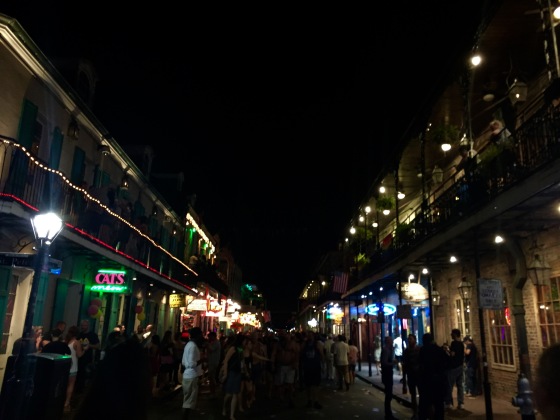 The next day, we had brunch at this WONDERFUL place called Café Amelie. This was definitely the best meal of our trip by far. We had the shrimp and grits, chicken and waffles, and a gumbo. The shrimp and grits BLEW MY MIND – my first time ever having that dish and I definitely am having major withdrawals now. Where have you been all my life?! 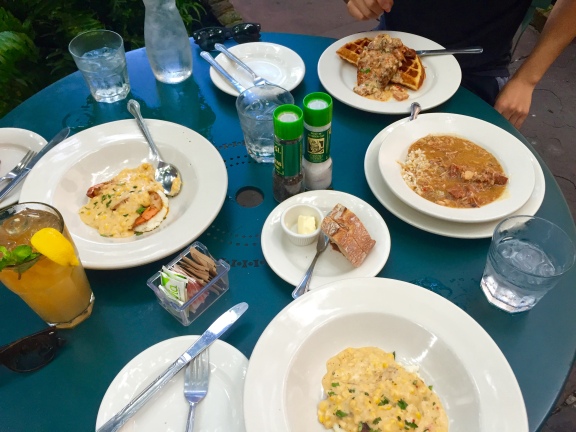 After, we walked around and then headed to the WWII museum! It’s ranked #4 museum in the U.S., and #11 in the world. We spent 3 hours here, and it wasn’t enough. Highly recommend checking this out if you like museums! We were starving so we went to Cochon Butcher for a snack and shared a Muffaletta, a New Orleans staple! A muffuletta is an Italian sandwich made of olive salad, mortadella, salami, mozzarella, ham, and provolone. Delicious. We also ordered brussels sprouts, because we were dying for some vegetables. Seriously, throughout our entire trip, we only had a Greek salad and these brussels sprouts. No wonder why the South is so unhealthy – we were seriously searching everywhere for veggies but to no avail.

After resting a bit, we went to Commander’s Palace. We made dinner reservations a week in advance, and we were extremely excited to try this place as it had been on every “must try” list possible. It has been rated the best restaurant in New Orleans for the past 3 years. The verdict? Sadly overrated. Maybe we are spoiled because we live in SF, where there are tons of great restaurants in a saturated area. Yelp review to come, but we were pretty disappointed.

We headed to Frenchmen Street after, what people call the “adult” Bourbon Street. This has a completely different vibe – it’s much more about the music and less about how many shots you could take, hah. We went to a cute little outdoor market and shopped around, and then headed to The Spotted Cat Music Club! The Jumbo Shrimp Jazz Band was playing and they were so good. I’m definitely no jazz connoisseur, but I had so much fun listening to them. Headed to another bar after that played more rock/hype music, but I much preferred The Spotted Cat. Definitely check it out – cheap drinks and great live music! It was a nice change of scenery from all the EDM concerts I’ve been attending in the last couple years.

Check out the Jumbo Shrimp Jazz Band on Soundcloud – here’s a playlist!

This post is getting way too long, so stay tuned for a part II! Hope this inspires you guys to check out New Orleans. We ate a ton, but did lots of other cool things too. We did a Hurricane Katrina tour on our last day, which was really eye-opening and among one of the best things we did on this trip. Another post to come!